Home

Resources

An immigrant's perspective: what unites us is why we are still here

An immigrant's perspective: what unites us is why we are still here

Damira, our beloved Privacy Counsel, takes us through a personal story of her family's refugee journey and reflects on why tackling immigration issues is more important than ever.

All about American culture 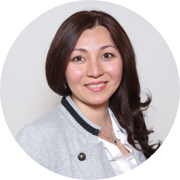 It was like any ordinary afternoon in the Washington, D.C. office of the law firm where I worked as a third-year associate attorney: the June sun was shining brightly through the floor-to-ceiling windows overlooking Farragut Square; an air conditioner was quietly humming in the background. I was at my desk when my personal cell phone rang. It was my aunt, my mother’s youngest sibling who—along with her family, my grandfather, my uncle and his family—lived some 6,625 miles away in a small city of Osh, Kyrgyzstan. Only nine years older than I am, my aunt used to frequently babysit me when I was a child, and despite the distance between us, we remained close.

For a moment, I hesitated to answer: I had a court brief to finish drafting before the end of the day. Then it occurred to me that it was long after midnight in Osh, so it must be something important. Perhaps my grandfather’s recovery from a recent planned surgery wasn’t going well.

When I picked up the phone, I never expected to hear my aunt’s terrified whisper against the backdrop of distant gunshots. I never imagined that I would spend the next three days, possibly the craziest of my life, worrying whether my grandfather, my aunts, uncles and cousins would be able to escape a violence against ethnic Uzbeks that started unexpectedly on June 10, 2010—the 20-year anniversary of a similar ethnic conflict that forced my mother, my brother and me to leave Osh two decades before. Along with thousands of others, mostly women and children, my family fled to neighboring Uzbekistan, where a makeshift refugee camp at the border was growing by the hour.

I would have never predicted that in the weeks to come, I would quickly learn basics of refugee and asylum law. I’d learn that Uzbekistan, unlike 146 countries, including the United States, was not a party to the 1967 Protocol to the UN Refugee Convention, which meant there was no legal path for asylum seekers. As a result, after the violence subsided a few weeks later, the refugees, including my family, had to return to Kyrgyzstan, where many faced further violence and abuse.

And I certainly would have never envisaged the images witnessed by my family and described in the news that haunt me to this day: images of my grandfather’s house looted by an angry mob; my uncle’s dog killed, most likely while trying to protect the house.Women fleeing with babies as young as five days in their hands, and one of an old man in a wheelchair—left behind in a torched house in the chaos of the moment. The images of burnt houses in the neighborhood where I used to play as a child.

I could have never imagined that six months later I would mourn the loss of my grandfather, whose health rapidly deteriorated following the traumatic experience, his last days plagued by nighttime horrors and daytime worries about the fate of his grandchildren. Or that after lots of paperwork and over a year of rigorous screening and waiting, I would be able to win my extended family’s asylum cases and bring a total of 10 people to the United States.

Like millions of asylees and refugees around the world, my family has experienced firsthand the fragile nature of civic order and the horrifying consequences of the all-too-familiar rhetoric of exceptionalism, fear-mongering, and false rumors of atrocities that spark mob violence in an environment where courts and law enforcement institutions are weak, corrupt, or distrusted.

Still, my family was very lucky. They lived. They were able to escape violence. Their children were not taken away and locked in cages. They were not tear-gassed at the border. They made it to America.

We live in a nation that is shaped and reshaped by refugees and immigrants. Throughout America’s history, it has attracted millions with the promise of freedom from tyranny, oppression and persecution. However, there is a disconnect between the idea of an America made of immigrants, and the daily living reality of immigrants.

As history shows, the land of the free has not always been kind to newcomers. In the 1850s, anti-immigration sentiment was strong against German and Irish immigrants; by the 1880s—against the Chinese leading to the Chinese Exclusion Act of 1882. In the 1890s through the 1930s, Italian immigrants were the newest target. In 1924, Congress passed the Immigration Act, which limited immigration from Southern and Eastern Europe, and banned Asian immigrants altogether. During the Great Depression, Mexicans were accused of stealing jobs and, as a result, about 2 million people of Mexican descent, many American citizens, were forcibly moved to Mexico. Hostility towards Jewish people in the wake of World War II are some of the darkest pages of American history, when thousands of Jewish refugees, like the passengers of the SS St. Louis, were turned away from the U.S. and later perished in Nazi concentration camps. After Pearl Harbor, more than 100,000 Japanese-Americans who lived in the country for generations were taken to internment camps. Over time, however, each new group slowly assimilated, changing both perceptions and demographics of the U.S.

But ever since the divisive 2016 presidential election, it seems we are moving backwards. I worry that racism, xenophobia, hate and destructive rhetoric is somehow winning, that anti-immigration sentiment is growing stronger, instigated and relentlessly supported by the most powerful office in our country. Despite having lived in the U.S. for over a decade and becoming a naturalized citizen, I no longer feel safe.

It sounds all too familiar: immigrants are accused of stealing jobs, taking advantage of social welfare and draining the economy, despite overwhelming evidence to the contrary. In fact, numerous studies and reports show that immigrants contribute significantly to this country’s economic growth. They subsidize social services like Medicare and drive entrepreneurship and innovation in the U.S., where more than half of the billion-dollar companies are founded by immigrants.

The timing of such anti-immigrant sentiment couldn’t have been worse. Today, an unprecedented 68.5 million people around the world have been forced from their homes because of conflict and persecution. A recent World Bank report warns that climate change and resulting water scarcity, droughts and sea-level rise will transform more than 143 million people in the world into “climate migrants.” At the same time, the accelerating pace of technological development constantly challenges traditional job categories and threatens employment and economic stability, potentially creating more domestic and international displacement.

I am disheartened that instead of working on smart policies aimed at dealing with the inevitable increase of migrations, we, as a society, retreat into nationalism and xenophobia. Instead of debating comprehensive immigration laws and common-sense solutions to modern day job creation, Congress debates building a border wall. Instead of fostering innovation in the public sector and improving financial inclusion for underserved Americans and newcomers alike, the current Administration implements a Muslim Ban.

Focusing on common-sense policies to address refugee and immigration issues is essential for our survival and survival of our children. But it also forces to re-examine who we are as a nation and what type of society we want to live in. I hope it is one that embraces equality, human dignity and the rule of law, as our Constitution’s Framers envisioned 229 years ago -- and not the one that shuts the door on those who are simply trying to survive and save their children from violence. I wonder, too, whether we are really ready to deal with the consequences of making the latter choice: one day, those in dire need of refuge could be us.

Like many immigrants and refugees that make this United States their adopted home, I know all too well the fragile nature of civil order that keeps every day ordinary. I also know what truly unites us is not why or how we came here, or how difficult it was to find a job or feed our families or cast a vote. What unites us is why we are still here.

We are here to be another strong voice for safeguarding that beacon of light of American democracy, for we have seen the ugly face of darkness.

How to Read the Visa Bulletin‍

How to get a Social Security Card

How to Immigrate to the United States