Moving to Los Angeles? Here’s what you need to know

Whether you come for a job, great food, community or culture, there’s a lot to explore in Los Angeles. Learn more about how to find an apartment, navigate transportation, set up your finances, land a job and more after your move to LA.

All about American culture 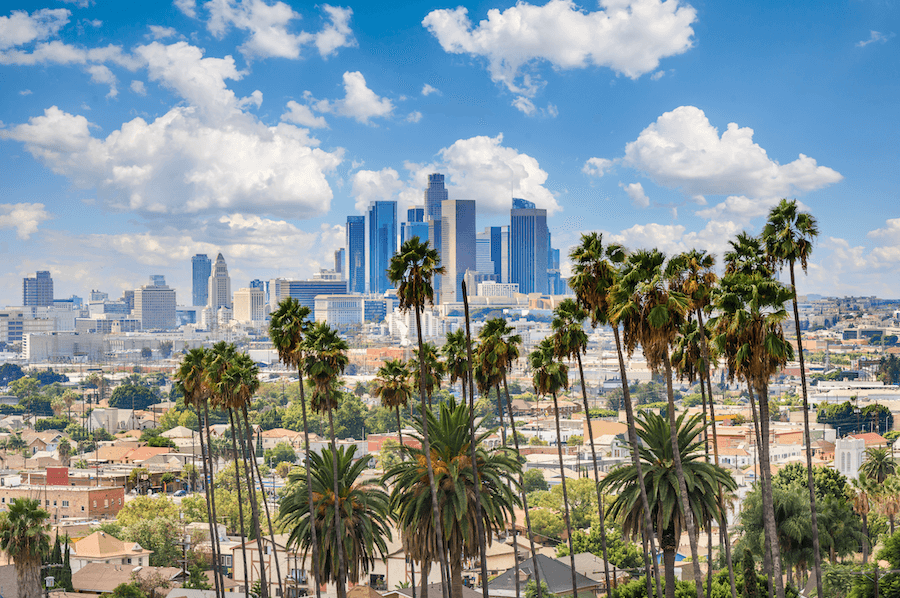 Nova Credit receives compensation from third-party advertisers. This content is not provided by them. Any reviews, recommendations, opinions and analyses expressed in this article are those of the authors alone, and have not been reviewed, approved or otherwise endorsed by any card issuer.

Los Angeles is a sprawling city of nearly four million people.  It’s both sunny—renowned for its Mediterranean climate—and starry—filled with the glamour of its creative industries. The economy is diverse, including education, manufacturing, and trade. The port of Los Angeles handles one-fifth of the goods that come into the United States. But Los Angeles’ real resource is its people. People from all over the world come to Los Angeles seeking a better life. More than 39 percent of the people in Los Angeles are immigrants. Nearly two-thirds of these immigrants come from Latin America and more than a quarter from Asia. In the LA Metro area, 185 languages are spoken, including Spanish, Chinese, Tagalog and Korean. There are ethnic enclaves for a variety of world cultures, from Little Ethiopia to Thai Town. Whether you come for a job, great food, community or culture, there’s a lot to explore.

How to find an apartment

Because Los Angeles is so large, you’ll want to make a decent commute a priority. Think of the neighborhoods in regional “clumps”—Central LA, for example, includes Koreatown, Silver Lake and the Hollywood Hills. Then you can consider your budget. Living by the beach is expensive, as is living Downtown. This map from Zumper, an apartment rental website, shows the average one-bedroom rent in different LA neighborhoods. Also take into account LA’s geography. For instance, the San Fernando Valley (often known as just “The Valley”) can be, as this climate map shows, extremely hot.

Ask your networks of friends and family if they know of any listings, and check internet sites such as Westside Rentals and rent.com. When you’re looking at apartments, bring an employment letter with you that shows your job title and your salary. If you are coming from abroad and have no credit history in the U.S., ask your landlord if he or she will accept First Advantage, Intellirent or Yardi. These are all companies that accept a credit history from select Nova Credit-enabled countries like Australia, Canada, India, Mexico, and the UK.

Most landlords will ask for rent in U.S. dollars from a U.S. bank. If you need a lease guarantee service, Nova Credit offers a partnership with The Guarantors, a financial company that will guarantee your rent payments for a fee. The landlord may ask for a security deposit, which must be refundable. The security deposit cannot be more than two months’ rent for an unfurnished unit or three months’ rent for a furnished one.

How to get around

‍
Los Angeles is a car-oriented city. Major highways are known by their numbers with the word “the” in front, so Interstate 405, a part of the San Diego Freeway which runs North-South, is known as “The 405.” Although LA’s average commute times are only about an hour, round-trip, traffic can be unpredictable. Workers in LA say that they have one of the most stressful commutes in the country.

Los Angeles has both regional and local transit. The regional transit (called Metro) operates both light rail lines and subway lines which  stops running at midnight Sunday through Thursday; on Friday and Saturday evenings it runs until 2 a.m. There is limited service on some lines until 5 a.m., when the system starts up again. Local transit includes the DASH bus network, which runs through Downtown LA and in 27 neighborhoods. Bus rides cost a mere 50 cents. If you're only making a temporary visit to Los Angeles, there are also some great options for short term luggage storage in Los Angeles.

To ride the Metro, you’ll get a Transit Access Pass, known as a TAP card. TAP cards have reloadable smart chips, and can be purchased online or at many vendors through LA. To check schedules, use the Metro mobile app or a transit app such as Transit.

The Department of Motor Vehicles issues driver’s licenses in LA. You will have to prove that you are a resident of California but you do not need to be a U.S. citizen, or even be in the country legally, in order to get a California driver’s license. You will need to provide your Social Security number, take an eye test, and pass a knowledge test based on the California Driver Handbook.

How to set up your finances

To open a bank account in California, bring your initial deposit. You’ll also need proof of where you live (proof of residency) and identification.

The next step is to transfer the credit history from your home country. You did the hard work of building it; now Nova Credit will help you get it over the border. Nova Credit’s technology allows you to transfer your existing credit history from countries including Australia, India, Mexico and the UK and bring it to the U.S. You can also begin to build your U.S. credit history by getting a cell phone plan and applying for a credit card, as well as renting an apartment. Nova Credit offers partnerships with several respected financial companies to help you get started.

How to find a job

Los Angeles is known as “the entertainment capital of the world.” Movie and television studios as well as newer media like video game design combine to employ more than 160,000 people. Salaries for the film industry from movie stars to makeup artists have been detailed by The Hollywood Reporter magazine. More than 50,000 people work in the aerospace and defense sector, with security-cleared professionals making just under $100,000 a year. Meanwhile, hospitality and tourism supported more than 678,400 jobs, according to the Los Angeles Economic Development Corporation.

If you have your heart set on making it in the movie industry, you’ll need persistence. In general, remember that looking for a job is a numbers game.

Always let your contacts (whether from your home country or your school) know what you are looking for. Also:

How to meet people from your community

Local restaurants are often informal community hubs. You can also find expat groups on Facebook. AussiesinLA, for example, has 12,000 members, and BritsinLA has nearly 16,000. You can also can search MeetUp for groups from your home country. A list of the Indian Community Groups in Los Angeles brings up everything from a book club to a motorcycle club to a parenting group to a “new in town, let’s explore” group.

Perhaps you need help from home. It might be a notary to process an official document, or help voting in your home country, or a referral to a doctor in an emergency situation. Fortunately, Los Angeles is a large city, and many countries have local consulates. For example:

How should you build credit in the U.S.?

There are multiple ways to build credit, each with their own hurdles. Enter your details to see what’s the best for you.

No SSN? Find out which card is best for you

Check if your eligible for a FICA Tax refund

New to the U.S? No problem!

Moving to the United States can be a daunting task for newcomers. In addition to gaining work authorization, you will also encounter problems with securing housing, utilities, identification, and legal hurdles.

If you are planning on starting life in the U.S, sign up to our newsletter for a FREE ebook guide on immigrating to the United States and a checklist for obtaining work authorization.

Thank you! We sent you an email with a download link and instructions on how fill out form G-1145. Check your inbox!
Oops! Something went wrong while submitting the form.

Need help moving to the U.S.?

Thank you! We sent you an email with a download link and instructions on how fill out form G-1145. Check your inbox!
Oops! Something went wrong while submitting the form.

Thank you! Your submission has been received!
Oops! Something went wrong while submitting the form.
© Copyright 2020 Nova Credit Inc.
Terms of ServicePrivacy PolicyCookie Policy




From Our Partner:
Loading...